How to Live a Life of Significance
By Rick Warren

“Jabez was more honorable than his brothers . . . Jabez cried out to the God of Israel, ‘Oh, that you would bless me and enlarge my territory! Let your hand be with me, and keep me from harm so that I will be free from pain.’ And God granted his request.” 1 Chronicles 4:9-10 (NIV)

Every human is designed for excellence. You may feel ordinary, but God made you to live a life of significance.

The Bible is filled with ordinary people who lived extraordinary lives because they believed God would work in and through them. They believed God made them for a purpose and intended for them to successfully fulfill their mission.

One example is a man named Jabez. God gave him an honorable mention in 1 Chronicles—a Bible book that includes nine chapters of genealogies. Right in the middle of that long list of names, God singles out Jabez—an ordinary guy—in two verses.

The Bible says, “Jabez was more honorable than his brothers . . . Jabez cried out to the God of Israel, ‘Oh, that you would bless me and enlarge my territory! Let your hand be with me, and keep me from harm so that I will be free from pain.’ And God granted his request” (1 Chronicles 4:9-10 NIV).

Those two verses give all the information we have about Jabez—but they reveal that he lived a life that was anything but average.

Jabez stands out because of three secrets to his success. We’ll look at the first two today.

He had great ambition. While many people are content with being average, Jabez wanted God to do something significant through him. He didn’t want to live half-heartedly; he wanted a full and meaningful life.

Jabez was ambitious, but, just as importantly, he was motivated by the right things. How do we know Jabez’s motives were genuine and not selfish? Because we read, “And God granted his request.” God will never honor an unworthy request.

Many people just drift through life. They have no goals, no master plan, and no overall purpose. As a result, they never go anywhere. If you want to live above average, dream big! You’re not meant to go through life wondering, “What am I doing? Where am I going?” God wants you to have a great ambition—fueled by the desire to serve him.

He had a growing faith. Jabez had a deep trust and belief in God. There’s no mention of him having any special ability or talent. The Bible doesn’t say he was wealthy or educated. He was just a common man with an uncommon faith.

There is something in life that is more important than ability and talent. It’s faith. I know a lot of super-talented people who are sitting on the sidelines while people who have faith are making the touchdowns. Faith is believing God will work through you.

How do you break out of mediocrity? Like Jabez, you get a great ambition and a growing faith—and depend on God to do the impossible. Missionary William Carey once said, “Attempt great things for God and then expect great things from God.”

Tomorrow we’ll look at the third secret that made Jabez really stand out: his genuine prayer life. 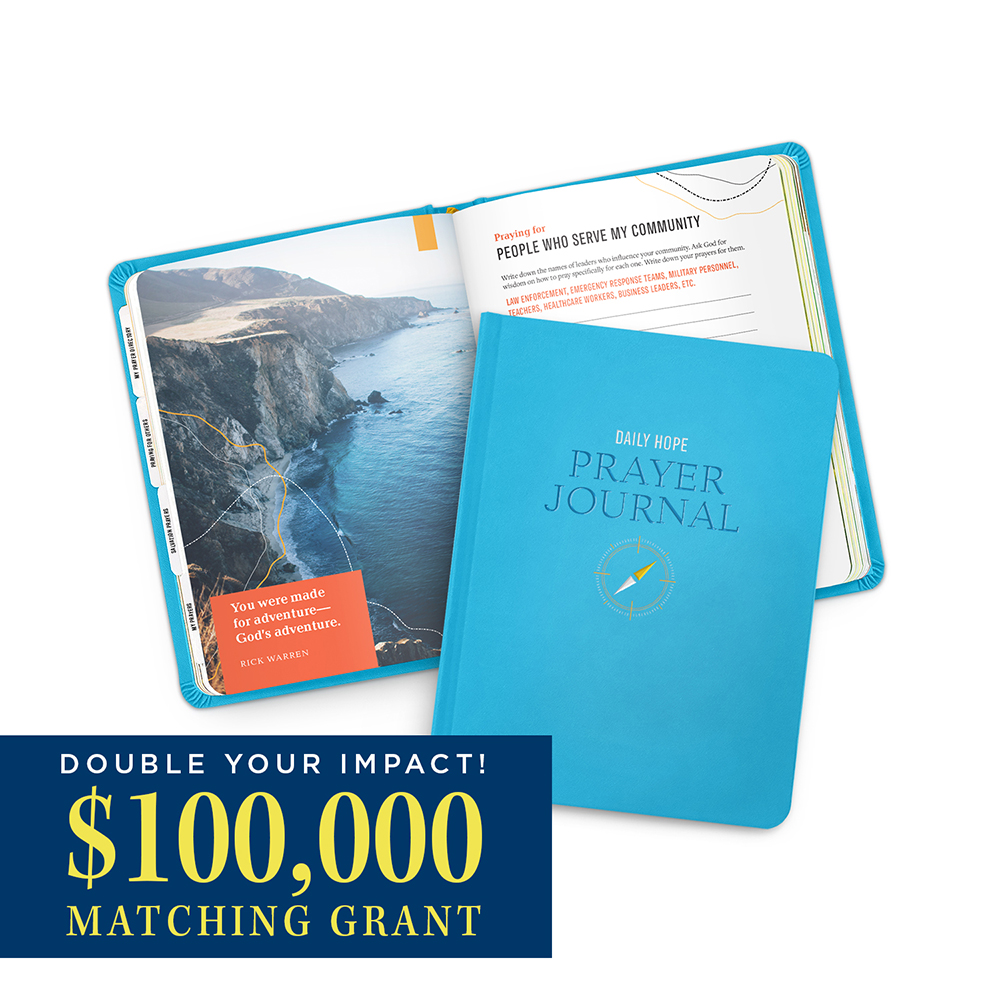 Step Into God’s Great Adventure for You!

God has an adventure for you—and every day is an invitation to say ‘yes’ to his plans.

We want to help you hear from him, follow his lead, and see his hand at work in your life with the brand-new Daily Hope Prayer Journal—our way to say thanks for your gift below.

And thanks to a generous $100,000 Matching Grant, your gift will be DOUBLED to bring the hope of Jesus to even more people!

It’s the perfect way to connect with the Lord through a consistent daily prayer time.

Request your Daily Hope Prayer Journal when you have your gift below doubled. We pray this journal helps you step into the adventure God has waiting for you!

All gifts will be doubled up to the full amount of the grant. Thank you for your generous support!

*The USA IRS code permits you to deduct the amount of your financial gift to Daily Hope that exceeds the fair market value of materials you received from Daily Hope.

This devotional © 2018 by Rick Warren. All rights reserved. Used by permission.

You can listen to Rick Warren on OnePlace.com.